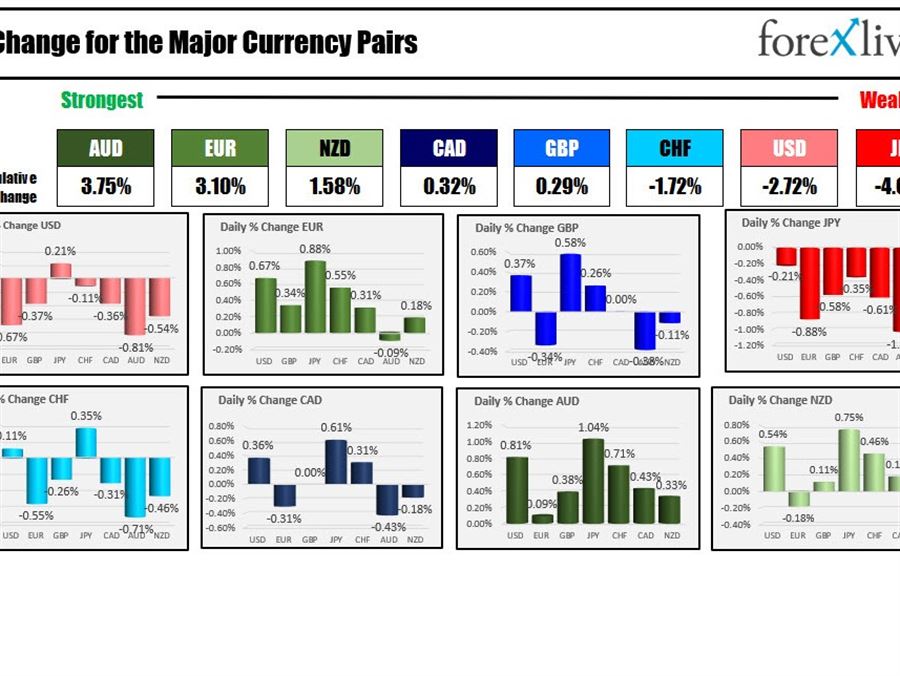 As the North American session begins, the AUD is the strongest while the JPY is the weakest. The USD is mostly lower.

There is a flow out of the relative safety of the JPY, USD and CHF today. The EUR is also stronger as hopes for peace in Ukraine ripple through the various markets.

Although there are reports of continued shelling (and suppression from leaving) of refugees trying to exit via the so-called corridors (and the death count rises), there has been some shifting in language by both parties on the intentions going forward which open a window for a peaceful solution to the war.

Russia’s foreign minister spokesperson Zakharova, said that Russia has no intention of occupying Ukraine or overthrowing the government (admittedly Putin alluded to that as well at times while continuing the invasion). Yesterday Ukraine’s Zelensky implied that he would drop the joining of NATO as a prerequisite for a deal.

Meanwhile, the pressure remains public company pressure continues on Russia with Coca Cola/Pepsi suspending soda sales, as does Starbucks and General Electric. Yum Yum Brands and McDonald’s both said that they would temporarily suspend operations in the country. Not only will these actions deny Russians of goods and services, but it also puts Russians out of work.

Fitch lowers the Russian rating further as they expect default of debt. There have been 160 additional Russians sanctioned including 14 oligarchs.

The Russian central bank prohibited the sale of the ruble for six months. The currency is 69% lower since February 17 swing low.

Yesterday the US and UK both said that they will look to ban Russian oil imports. The EU looks to cut its reliance on imports by two thirds within a year.

US and European stocks are higher. Yields are also higher. Gold is lower. Oil is lower. Bitcoin is surging. Wheat is lower for the second consecutive day. Nickel continues not to trade after the LME stopped trading yesterday and and X’ed out the short squeeze trades that sent the price up toward $100,000.

A snapshot look at the market is showing:

In the premarket for the US stocks, the major indices are sharply higher and looking to snap four-day declines:

European shares are also sharply higher with the DAX index up nearly 5%:

In the US debt market, US yields are continuing their move back to the upside the second consecutive day

In the European debt market, the benchmark 10 year yields are also continuing their move to the upside today. The German 10 year is more comfortably above the parity level at 0.166%:

Jolts job openings for January will be released at 10 AM ET with expectations of 10.925 million (unchanged from last month).

GBPUSD trade between swing area on the daily chart

USDJPY succumbs to the dollar selling

Cable eyes 1.3000 as dollar keeps weaker on the session

Cable creeps back a little higher above 1.3100 as buyers wrestle back some near-term control