As North American traders enter for the day, the CHF is the strongest and the NZD is the weakest. The New Zealand Prime Minister Arden declared a national lockdown after finding a single case of Covid and that helped changed the dialogue for the interest rate decision in the new trading day tomorrow.  Westpac are now starting to talk about no change in policy after the high expectation for one previously.  It may not be a fait accompli.  The CHF is the strongest for the 2nd consecutive day as investors in currencies are moving toward safe haven flows. The USD and JPY are also mostly higher which is often a tell tale sign of  the safe haven trade.  Reports of additional China regulation hurt stocks in Asia. The European shares are lower as well. 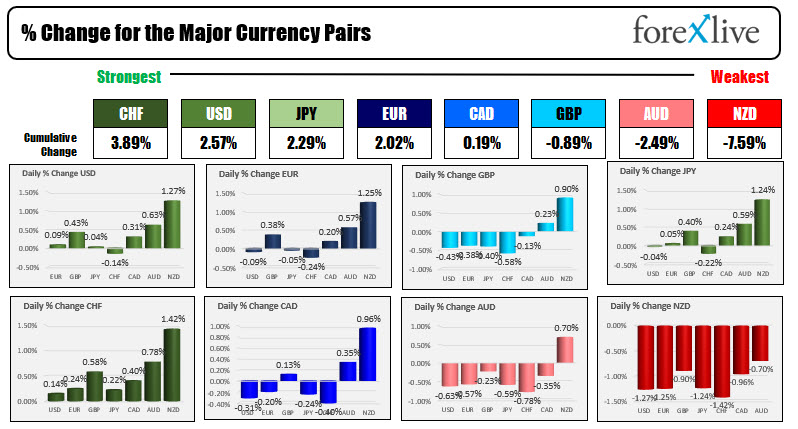 The US will release retail sales at the bottom of the hour with expectations for a decline of -0.2%.  Industrial production/capacity utilization will also be released today with expectations for industrial production to rise by 0.5 and capacity utilization to come at 75.7(versus 75.4 last month).  Business inventories will be released at 10 a.m. ET (0.8% expected) along with NAHB housing market index which is expected to remain steady at 80. Feds Kashkari and Fed Chair Powell are expected to speak.  Kashkari is a dove.  Powell is speaking at a town hall where he is discussing the work at the Federal Reserve and economic education before educators and students. It will be interesting to see if he discusses the current economy in monetary poliicy specifically. The Jackson Hole Summit is scheduled for August 26 – 28th. The market is awaiting that speaking engagement to announce formal plans for a tapering perhaps..

in other markets as North American trading gets underway:

In the premarket for US stocks, the major indices are lower after the S&P and Dow industrial average closed at record levels yet again yesterday (for the fifth consecutive time). Walmart did report better earnings before the open but shares are lower on weaker than expectedInternet sales.

European equities are mostly lower for the second consecutive day (the UK FTSE 100 is the exception):

USDJPY moves to new highs as yields move back toward unchanged

EURUSD tests swing level ahead of the 2021 low