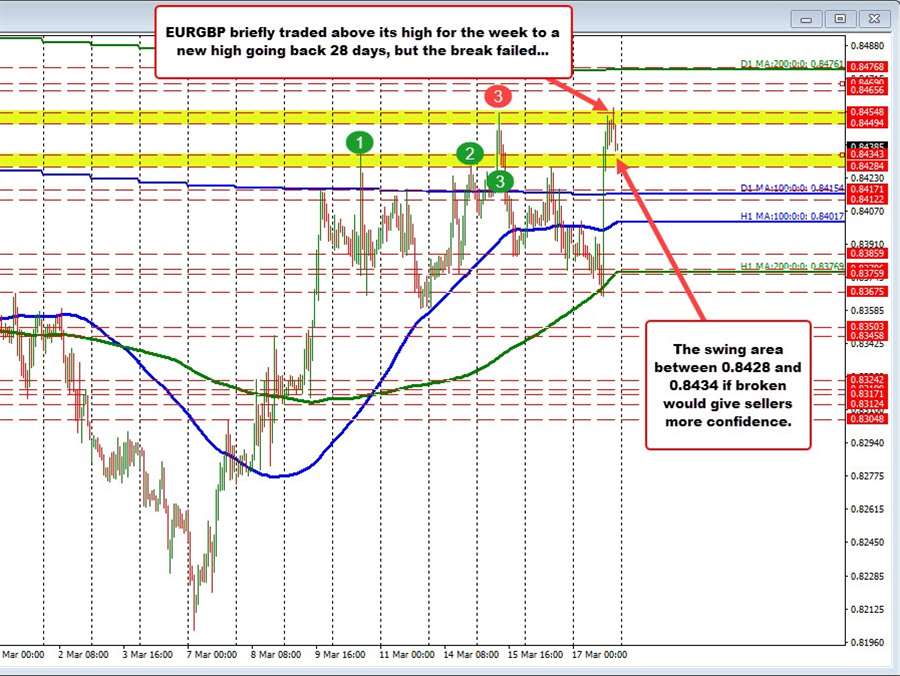 The EURGBP fell lower ahead of the Bank of England decision, but after falling to its 200 hour moving average, the pair quickly reversed higher help by the more hesitant tightening from the central bank.

Momentum continued with a test and quick break of the high price from Tuesday’s trade at 0.84548. The high price reached 0.84574 just three or so pips above the week high and to the highest level in 28 trading days (going back to February 7).

The inability to extend higher has pushed the price back lower and toward the high from last week at 0.8434.

Was the rejection of the new high enough to tilt the bias back to the downside?

The right now, the buyers are holding onto a bit more control in the short term. However, a move below 0.8434 and 0.84284 (swing high from last week and from yesterday’s trade) would give sellers a bit more confidence and could lead to a rotation back toward the 100 day moving average at 0.84154. Move below that level and sellers feel increasingly more confident.

So a battle is on right now between 0.8428 and the swing highs for the week near 0.8455, with the buyers trying to hold onto the intraday edge. A move to a new high would have traders targeting the 200 day moving average up at 0.84761. The price is not traded above its 200 day moving average since December 9.

US stocks extend gains. Nasdaq and S&P up close to 1% now.

Dollar sees some selling as the US morning progresses