USDCHF makes another break into the recent high extreme area. Will it fail again? 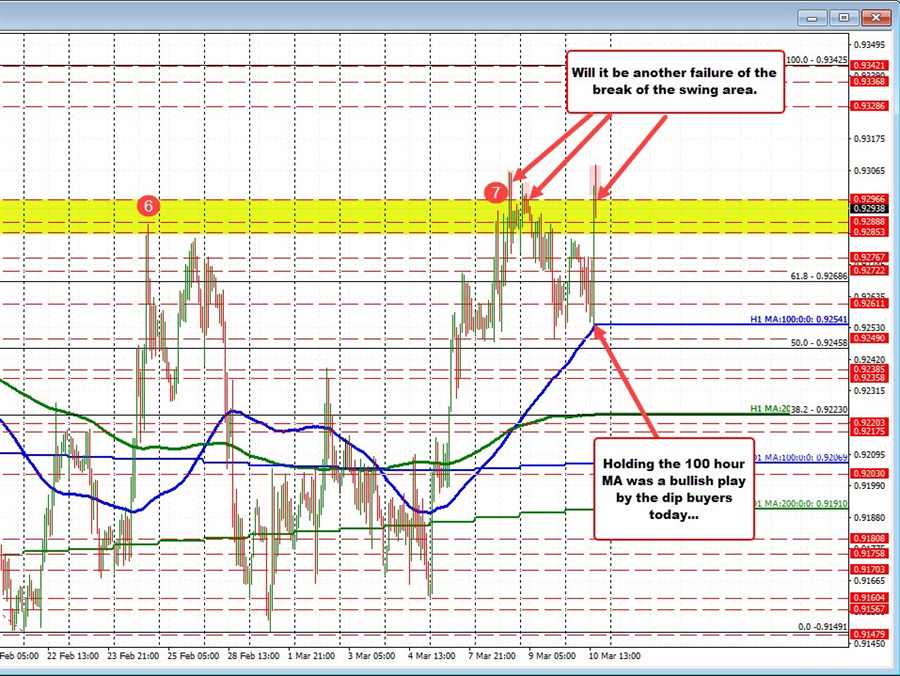 The USDCHF moved up and then back down in the Asian/early European session. However, the 100 hour moving average at 0.9254 stalled the last fall, and the pair moved higher off of that key support level. Holding the moving average increases that level of importance going forward. Be aware.

The run to the upside has since been able to extend above a topside swing area ahead of the recent extreme. That swing area comes between 0.9285 and 0.9296 (see red numbered circles).

Admittedly this week, the price has tried to extend above that swing area on Tuesday, Wednesday and again today on the most recent move higher.

The first two days saw the price fail and move lower (eventually). This is the third try, and the price has moved back within the swing area but has so far been able to stay above the lower end at 0.92853. The current price is trading back at 0.9300 as I speak above the upper end.

So there is some indications that perhaps the third time will be a charm, and the price will continue the upside momentum toward 0.9228 and 0.92425 (recent cycle swing highs going back to the end of January).

As long as the price can stay above 0.9285, the bias remains in that direction. Will below that level and all bets are off as disappointment reemerges.

USDJPY retests the earlier high and also a swing level at 116.188