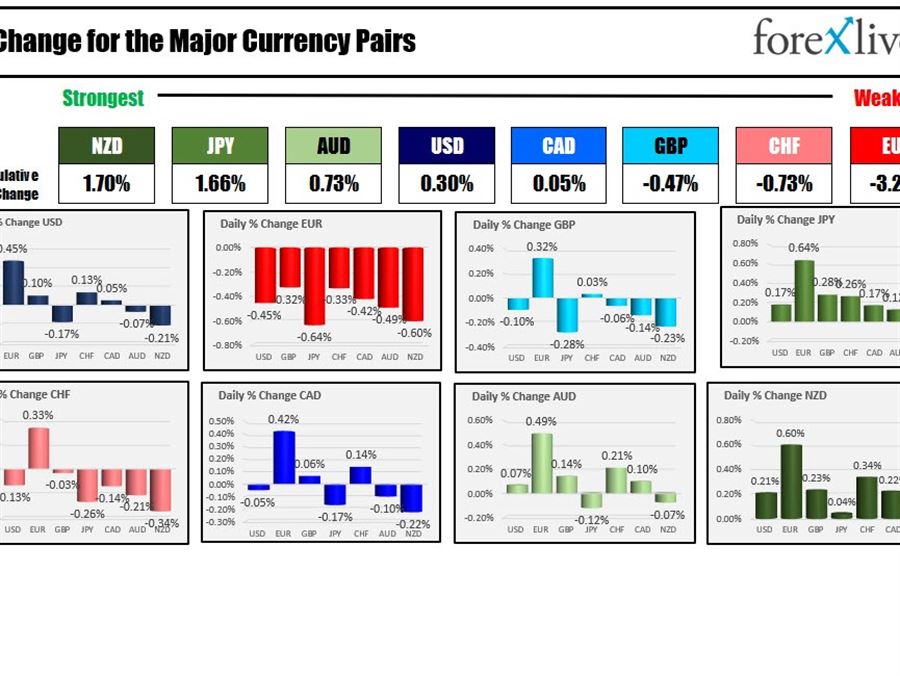 As the North American session begins, the NZD is the strongest of the majors, while the EUR is the weakest. The major currency pairs are relatively scrunched together indicative of a market that is awaiting the next shove.

Yesterday the ceasefire talks failed and Russian troops made their way with a 40 mile convoy to Kyiv with shelling in many of the major cities in Ukraine. Frustrated by initial efforts to force the Ukrainians to step down, the Russian forces are now targeting civilian areas. An explosion in the city of Kharkiv from an apparent rocket strike devastated a large minute straight of building killing seven people and injuring 24.

The NATO nations and corporations are all imposing economic sanctions and cutting off ties to Russia. BP, Total and Shell all announced they would be exiting their joint venture stakes and investments with Russian energy companies. Other companies have also announced that they would cease operations in Russia. Central banks and governments announced their own sanctions including currency controls. France announced that they looking to identify and seize homes, luxury cars, yachts and other France based assets held by Russian oligarchs. The EU has finalize list of Russian banks that plans to ban from using the SWIFT Interbank transfer system

The US stocks are lower as are the European shares.

In the European equity markets, the major indices are all sharply lower:

US bond yields are sharply lower for the second consecutive day.

European yields are also tumbling as funds flow into the safety of their debt instruments:

Today is the first day of the month which corresponds with the release of the Markit PMI data estimate as well as the ISM Manufacturing PMI (at 9:45 AM and 10:00 AM respectively).

Prior to those releases, Canada GDP will be released at 8:30 AM ET with the Q4 annualized growth rate of 6.5% versus 5.4% and third-quarter. The month-to-month is expected to rise by 0.1% versus 0.6% last month.

At 9:30 AM, the Markit PMI for Canada will be released with last month’s reading coming at 56.2

Also at 10 AM ET, the US construction spending for January is expected to rise by 0.2% after a 0.2% gain in December

EURUSD bounces near lows from yesterday

The USDJPY trades back below swing area and 100 hour MA