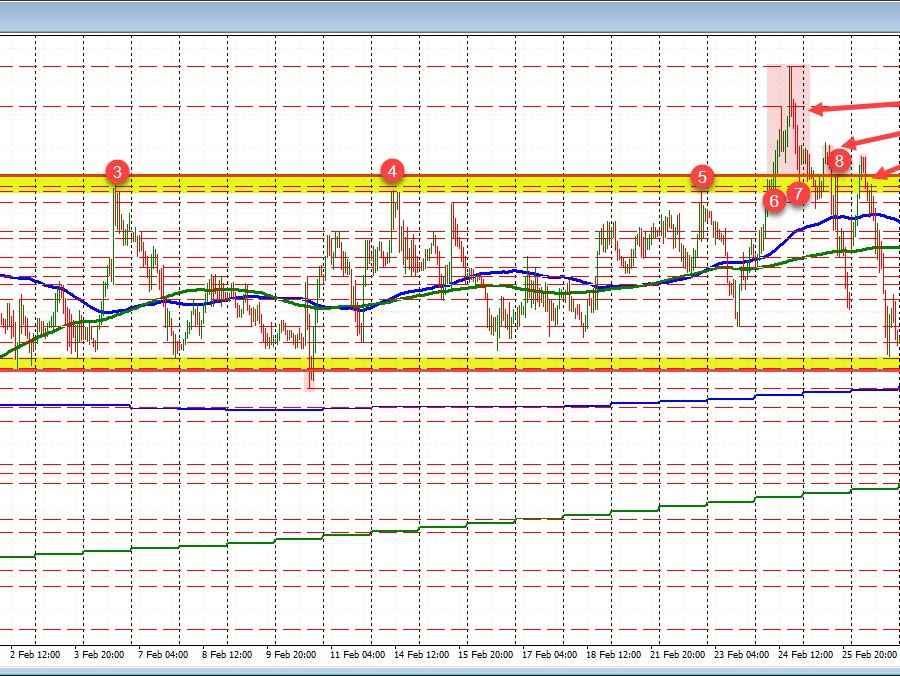 Yesterday the Canada GDP grew by 6.7% annualized in the fourth quarter. That was faster than expectations. Inflation is also much higher then the target rate at 5.1% year on year. Moreover the last report was much stronger than the 4.8% expected. All of which points to a 0.25% increase to 0.50% from the Bank of Canada today. They will announce a decision at 10 AM ET.

Technically, the USDCAD moved higher yesterday in reaction to the USD buying, but did stall right near its 100 hour moving average (blue line in the chart above).

Today, both the 100 and 200 hour moving averages are converged at 1.27403. The high price in the London morning session stalled ahead of the 100 hour MA again, and has moved lower.

A move below that level today, and traders will next target the low of a long consolidation range going back to January 26 between 1.2649 and 1.26566 (see low of the red box in the chart above).

Admittedly, there was a brief break below that level back on February 10, but the break was quickly reversed and the price rotated back toward the upper extreme. The low price on the day reached 1.26344. It would be a target on increased selling pressure today.

Taking a broader look over the consolidation, the price has stayed mostly between 1.26496 and 1.27956 (see red box in the chart above). Last week, the price did extend above the higher extreme on its way to a high price of 1.28766. However those gains were quickly erased. On Friday and again on Monday the price tried to extend above the upper extreme, only to fail on each try.

Technically, holding against the 100 hour moving average – both yesterday and today – is a bearish “tell” from the market. It would take a move above those moving averages to tilt the bias back in the direction of the buyers. Absent that , and breaking outside of the red box to the downside, and then below the 100 day moving average at 1.2638, and the low from February 10 at 1.26344 would increase the bearish bias.

There could be a big move forthcoming as the price has been confined in a narrow range for such a long period of time. Be aware

USDCAD on the ledge of the lower extreme(s)

AUDUSD trades to the highest level in 34 days