USD/MXN is a great risk gauge at the moment 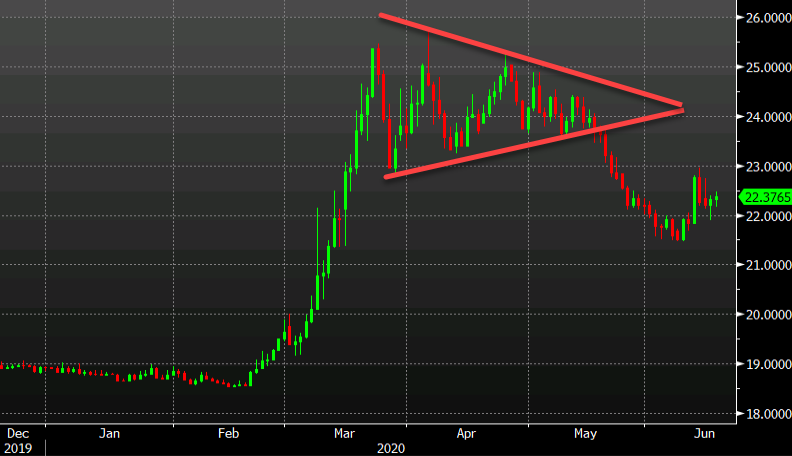 USD/MXN tells the story of COVID-19 as well as any chart. The jump in Feb-March shows the remarkable fear followed by two months of uncertainty.

Midway through May, the wedge in the chart broke to the downside and there was a sensational one-way ‘risk on’ trade — something I warned about in late April. That move stalled out last week as the market began to grow uneasy about prospects for more easy money, along with outbreaks in Latin America and the southern US.

There was a sharp retracement last Thursday and now the market is uncertain. There was a failed break to the downside yesterday and today is something akin to a doji star (on USD/MXN and many other charts).

I could give you a handful of reasons why risk trades like this one could break in either direction but it’s basically a tug-of-war between easy money and virus fears.

GBPUSD defines close support and close resistance. What next?

EURUSD builds to the upside. Can the momentum be sustained?

The AUDUSD has reached its 100 hour MA

The AUD is the strongest while the JPY is the weakest...

AUDUSD breaks below a swing area support, but runs into February...

ABOUT US
THIS WEBSITE IS A COMPREHENSIVE GUIDE FOR FOREX TRADING FOR BOTH THE BEGINNERS AND PROFESSIONALS .WE HELP YOU TO GET A BETTER PERSPECTIVE OF THE MARKET FROM THE VIEWPOINT OF PROFESSIONALS IN THIS FIELD.
Contact us: contact.forexreview@gmail.com
© FOREX REVIEW ONLINE 2020

The CHF is the strongest and the NZD is the weakest...

USDCAD continues its move to the downside. Reaches the next key...