So how did the USD do in August? 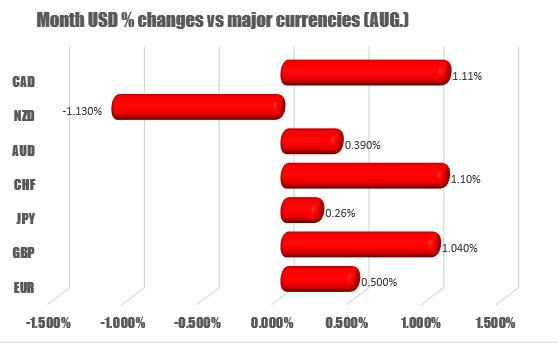 The US dollar rose against all the major currencies with the one exception being the NZD.

Recall that in August the RBNZ was expected to raise rates by 0.25%, but put the rate hike on hold after the decision of the Government to impose Level 4 COVID restrictions on activity across New Zealand right before the decision.

However the central bank also said that the

They added that they

All are hawkish assessments.

In the US, the dollar was boosted by a shift in policy tilt by a number of Fed officials toward starting the taper sooner rather than later.  That however, did not include Fed Chair Powell who remains cautious on starting the taper.

S&P, Dow trade in the black

USDCHF falls down to test the 100 day MA level

USDCAD staying below the swing area/lows