USD extends lower with the USDCHF the biggest mover

EURUSD extends the narrow trading range for the week.

The USD has trended/extended lower after the what we can expected Michigan consumer sentiment. The biggest mover is the USDCHF. The dollars decline verse the CAD is little changed as the loonie and USD follow each other today. 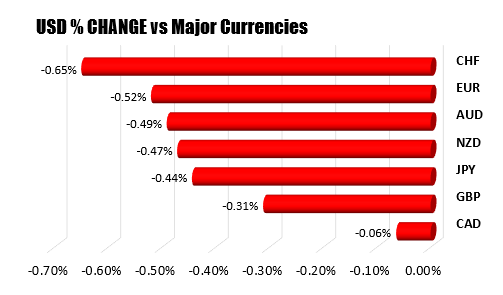 For traders, stay below 110.02 keeps the bias in the direction of the shorts/sellers.

Close risk for the buyers now comes in at the 100 hour moving average.  Recall from yesterday, the price moved below that level retested that before moving sharply to the downside.

USDCAD: The USDCAD is testing a trendline near 1.2504 and below that a swing line at 1.2500. The pair has been less trendy than the other currency pairs vs the USD but is still reaching a new low for the day. The range is only 27 pips vs the 22 day average of 82 pips.

US stocks open near unchanged levels