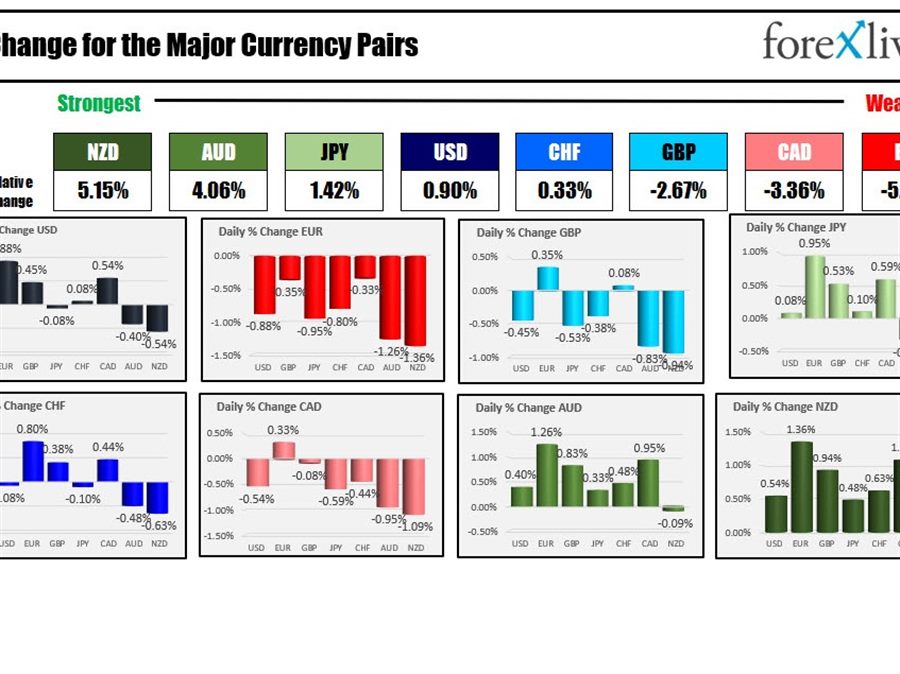 As the North American session begins, the NZD and the AUD are the strongest of the major currencies, while the EUR is the weakest. The USD is mixed to higher ahead of its jobs report that will be released at 8:30 AM ET.

Overnight, the fire at the Ukrainian nuclear power plant once again stirred up the anxiousness from the Russian invasion of Ukraine. However concerns about a nuclear disaster seems to be have been averted as the fire took place outside of the nuclear reactor area. Nevertheless Russian forces have seized the largest nuclear power plant Zaporizhzhia which supplies more than 1/5 of the electricity that is generated in Ukraine. The implications include the an easier take-over ofthe entire country, as well as the potential for more disruption of energy supplies in Europe.

A view of the market shows:

As mention the NZD and AUD are higher. That is not typically the ‘flight out of risk” reaction, but being isolated, and rich with natural resources may be a benefit in the big picture (at least for now). The storyline can change, however.

As for the US jobs report, nonfarm payrolls is expected to rise by 400K after last months 467K advance. This type report along with the inflationary implications from disruptions as a result of Russia’s invasion would not be great news for the inflation expectations.

Fed chair Powell during his testimony on Capitol Hill this week said that he would look to raise rates by 25 basis points in March. However he would not be opposed to raising rates at a larger pace at future meetings or meetings given the trajectory of inflation and risks of it becoming more embedded. He also answered “Yes” when asked if he would act in a Volcker-esque way to combat inflation. The number of Fed tightening’s in 2022 moved up to six from 5 yesterday.

A snapshot of other markets as North American traders start their trading during shows:

In the premarket for US stocks, the major indices are lower. The futures implying

In the European equity markets, the major indices are sharply lower:

In the US debt market, yields are moving back to the downside today on flight to safety flows. The last few days of seen yields rebound/steady themselves on inflation concerns. Now the push me/pull me flows are back into relative safety mode

In the European debt market, yields are also lower with Germany down the most. Rates in Germany are back down in negative territory after rising above and below over the last few trading days. The yield reach as high as 0.331% less than a month ago (on February 16). That was the highest level since December 2018.