The USD is modestly higher

As the North American session gets underway, the NZD is the strongest, the CAD is the weakest. The USDCAD continued its move to the upside today moving up to test the swing high from August 27h, but finding sellers against the level  (at 1.2707).  The move higher comes despite higher oil prices after yesterday’s sharp decline, but ahead of the BOC rate decision at 10 AM ET.  US stocks are modestly lower but off the pre-market lows (the Dow was down triple digits – it is near unchanged now). US yields are lower after yesterday’s move higher. The US treasury will auction off 10 year notes at 1 PM ET (and 30 year bonds tomorrow).  The ECB will meet and announce their latest decision tomorrow. ECBs Holzmann in an interview for a magazine said that ECB could reduce if the bond purchases faster than the market expects as a result of better than expected growth.  Holzmann is a hawk. 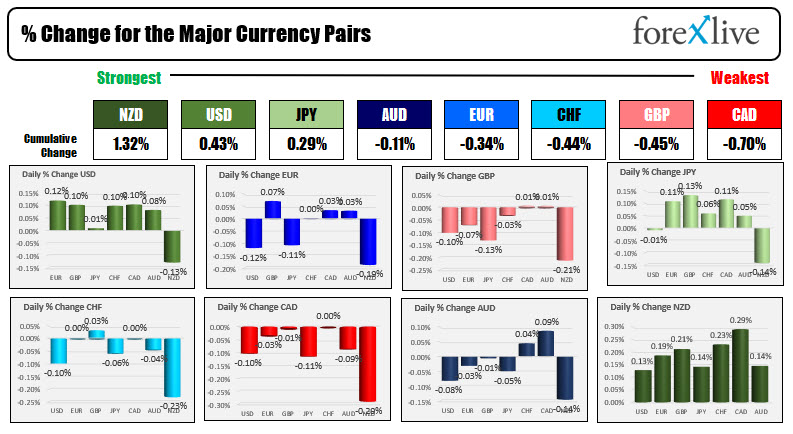 The USD is mostly higher BUT the ranges today are modest with ranges of 40 pips or less in the EURUSD, GBPUSD, USDJPY, USDCHF, and NZDUSD.  The biggest mover is the USDCAD which raced higher before finding resistance and correcting into the North American opening.

Looking at other markets,

In the premarket for US stocks, the major indices are little changed. Yesterday the NASDAQ index closed at another record. The S&P and Dow were lower however:

In the European equity markets, the major indices are lower:

In the US debt market, the major indices are lower after the sharp rise yesterday saw the yield moved to the highest level since July 14.

US stocks getting hit with the NASDAQ leading the way

Euro threatens 1.1700 in potential fall to the lowest since November

Dow leads the charge as Nasdaq gives up some gains.

Two worrisome chart breakdowns look to have been invalidated