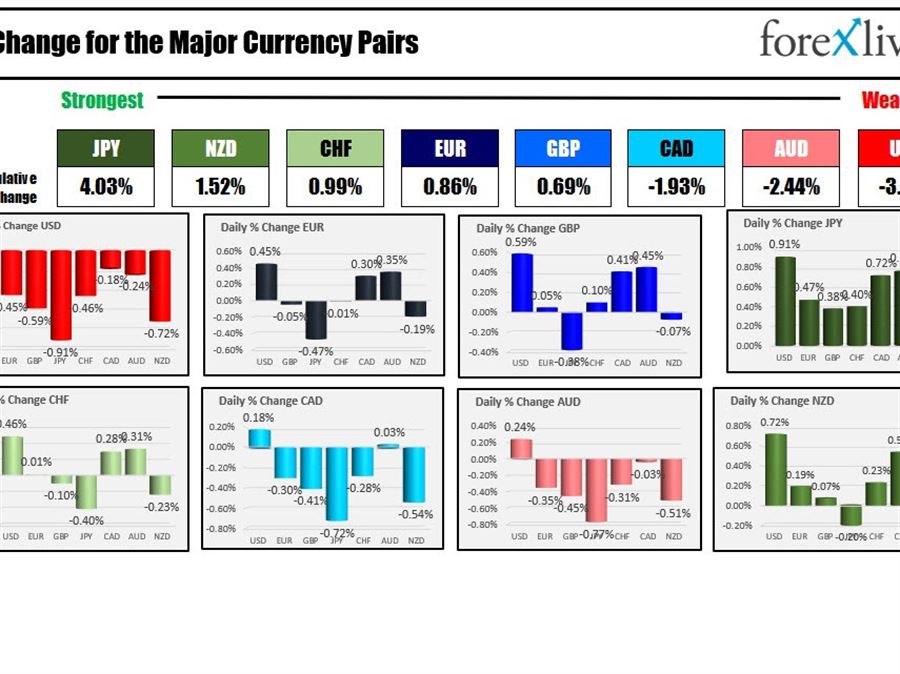 As the NA session begins the JPY is the strongest (and adds to the gains from yesterday) and the USD is the weakest.

The USDJPY reached the highest level since August 2015 on Monday and had been up 14 of 16 trading days. However yesterday the pair moved lower and today the pair is also lower as the North American session begins.

The hopes from the peace talks yesterday has faded more today and that has traders concerned. Russia is expected to cut supplies of natural gas to Germany on April 1. As a result, Europe’s largest economy has made plans to ration natural gas supplies. Today, Germany inflation came in at 7.3% which was much higher than the 6.3% estimate.

In the US the ADP report will be released at 8:15 AM ET with estimates for 450K. Last month the data showed a 475K move higher (versus 678K from the BLS). The US jobs report on Friday is expected to show a rise of 485K. Also released today will be final GDP for 4Q with expectations of 7.0% (unchanged from the prior estimate).

A look around other markets is showing.

In the premarket for US stocks, the major indices are trading lower:

In the European equity markets, the major indices are mostly lower with the exception of the UK’s FTSE 100

In the US debt market, US yields are mixed/little changed:

In the European debt market, the snapshot of the benchmark 10 year yields are rising:

Nasdaq heads back to the lows. Down -220 points going into the close

EURUSD up and down and up bounces continue today

Gold sticks with the bullish breakout as buyers eye the $1,800 level

AUD/USD keeps flatter on the session, buyers still in search of a break higher