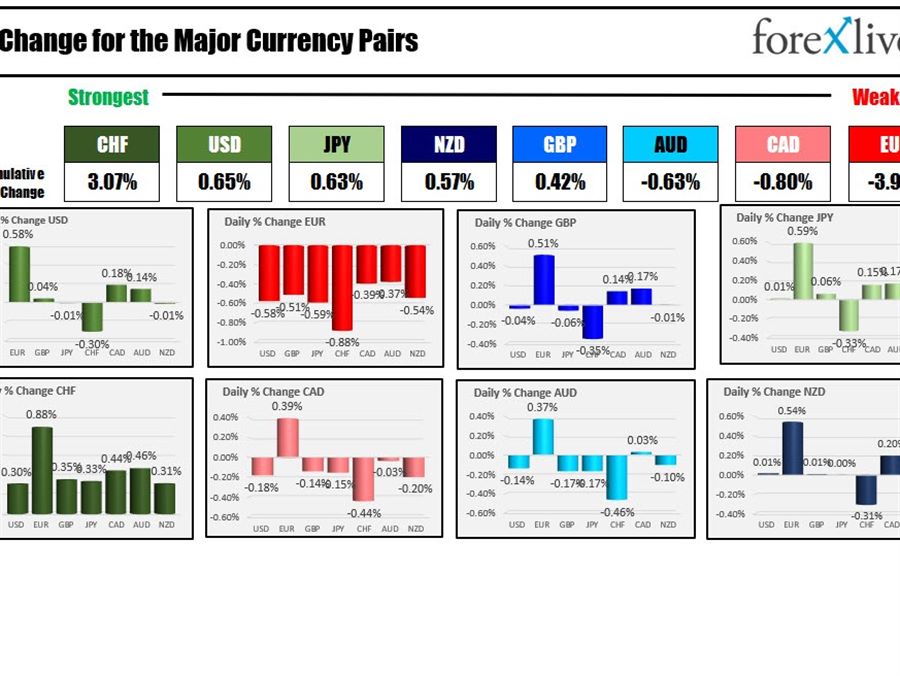 As the North American session begins, the major currencies show the CHF is the strongest and the EUR is the weakest. Flow of funds are going into the relative safety (and secrecy) of the CHF, and out of the EUR as it’s impact economically from the impact of oil and natural gas as a result of the Russian conflict weighs on its currency.

The biggest mover globally is on USDRUB which saw the ruble depreciate from 84.34 on Friday to 104.53 today or -23.93%. Russian stock markets were closed today masking the impact of the economic sanctions, but can be expected to open sharply lower when they do reopen.

The US treasury said it would immobilize Russian Central Bank assets held in the US, and impose additional sanctions on the Russian Direct Investment Fund, a sovereign wealth fund in an attempt to limit Russia’s use use international reserves to counteract the impact on it’s currency and other sanctions. There is an exemption for Russia’s energy exports, however.

Over the weekend, the major EU countries and the US said they would remove some Russian banks from the SWIFT system, which would bar them from international transactions. There were a host of other measures enacted to choke off Russia from the global markets and enact economic pain to individuals including Putin.

Members of the Ukraine delegation are meeting with Russian officials in an attempt to negotiate a withdrawal of troops.

The European indices are lower as are the US stocks in premarket trading but the indices are off there lows.

The US crude oil futures are higher but near the midpoint of the overnight range. Gold is higher but well off the spike high from last week.

Looking at the details of markets to start the North American sesion:

In the premarket for US stocks, the major indices are trading lower after Friday’s gains:

In the European equity markets, the major indices are lower as well:

In the US debt market, yields are lower by -5.5 to -8.8 basis points with the 2 year the biggest decliner. The chance of a 50 basis point rise in the US is down to about 10%. Fed Chair Powell is due to testify on Capitol Hill on Wednesday and Thursday.

In the European debt market, the benchmark 10 year yields are lower across the board. Below the ranges and changes of the tender yields in major European countries.

Gold trades to its highest level since 2012

USDCAD cracks back below the 100 hour MA

Ups and downs continue in the EURUSD. Back down and below the 200 hour MA again