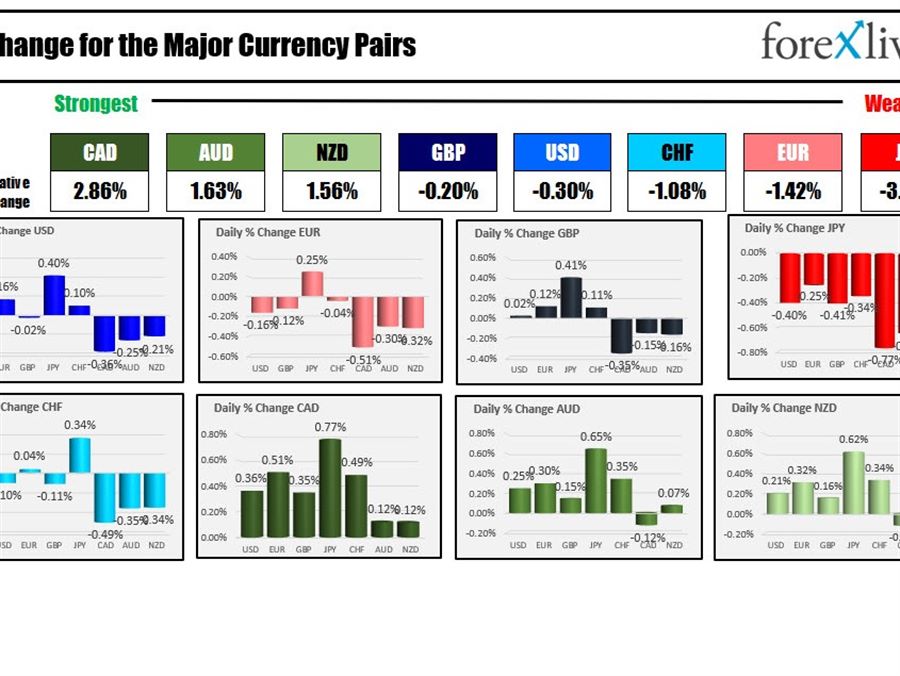 The CAD is the strongest and the JPY is the weakest as the North American session begins. The USD is starting the day mixed with modest up gains vs the EUR, JPY, CHF and declines vs the CAD, AUD and NZD. The GBPUSD is little changed.

The anxiety of the Russian/Ukraine conflict continues. President Biden in his State of the Union vowed to make Putin “pay a price” for the invasion and that Putin would regret the decision for sending his forces into Ukraine. Meanwhile, Russian troops are positioning troops around the the Capital city of Kyiv (the 40 mile convoy continues with infrastructure problems slowing things down or so it seems), and are also “laying siege” to Kharkiv. Russian troops are still battling with Ukrainian forces to hold the southern city of Kherson.

Meanwhile private companies are adding to the pressure by taking their own actions against Russia (see the growing list of companies below who have announced measures).

The Bank of Canada is meeting today, and will likely announce a 25 basis point rise at 10 AM ET. The USDCAD is a little lower perhaps in anticipation after yesterday’s run up that saw the price stall against the near converged 100/200 hour MAs at 1.2743.

Fed chair Powell will testify in front of the House financial services committee on Capitol Hill today and in front of the House tomorrow. With the stock market rates coming off sharply on flight to safety flows, so has the expectations for a potential 50 basis point hike at the March meeting. Nevertheless, there are some Fed members who still see a potential hike of that magnitude. Given Powell’s history, it would seem that he would likely look to start raising rates in March, but only by 25 basis points. Traders will be hanging on his words for clues to his intentions and also his views on inflation as commodity price soar on Russian/Ukraine developments. The testimony is to begin at 10 AM ET.

OPEC is meeting (well the meeting just ended), and are largely expected to keep the production increases at the 400,000 barrels per day. That is not helping the price of oil which is trading at $109.46.

In other economic news today:

A snapshot of other markets as the North American session gets underway shows:

In the pre-market for US stocks, the major indices are trading higher:

In the European equity markets, the major indices are trying to rebound:

In the US debt market, yields have rebounded after yesterday’s fall which saw the 10 year move down -10.8 basis points. The current 10 year is up about 4.7 basis points.

In the European debt market, the yields are higher as well. German yields are working the way back toward the parity level but still just below at -0.022%.

USDCAD stays in the "Red Box"