Oil down 1% on the day, heads for biggest monthly drop since October last year

WTI crude looks set for its worst month since October, with the 1% drop so far today adding to the poor August performance. The month has been characterised by a stronger dollar to some extent as well as delta variant concerns, weighing on oil prices. 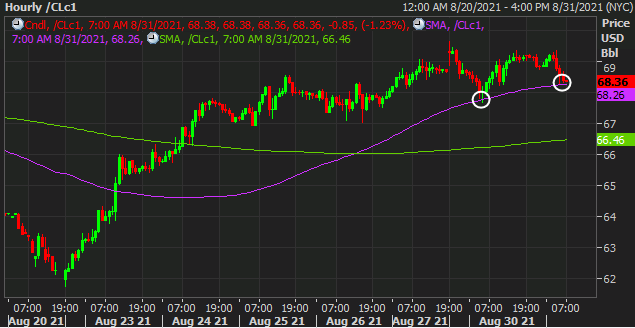 The latest drop today brings oil close to testing its key near-term levels once again, with the 100-hour moving average (purple line) in focus as it was at the end of last week.

Keep above that and buyers hold near-term control but break below and the bias turns more neutral instead.

Looking at the daily chart though, we can see that oil gains continue to see some resistance closer to $70 for the time being and that is perhaps part of the story here. 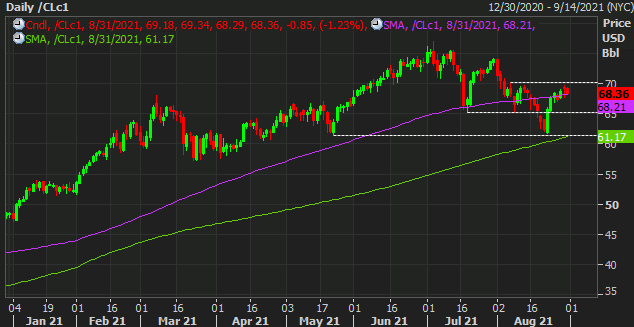 The 100-day moving average (purple line) is also a key technical support level to watch adding to the near-term level highlighted above, so that provides the key region that buyers must keep above in order to sustain the latest upside leg.

Otherwise, oil may yet be caught in a bit of a tug of war between the May and August lows around $61.70 to the $70 mark until the fundamental picture sorts itself out.

For this week, OPEC+ meets tomorrow but they are expected to stick with the status quo and carry on with plans to increase output by 400k bpd per month starting September.

EURGBP moves back below its 100 day MA. Run higher fails

USDCAD extends above the 200 hour MA and runs

What currencies have done well and not so well this week.