Oil down 1% as three-day rally pauses 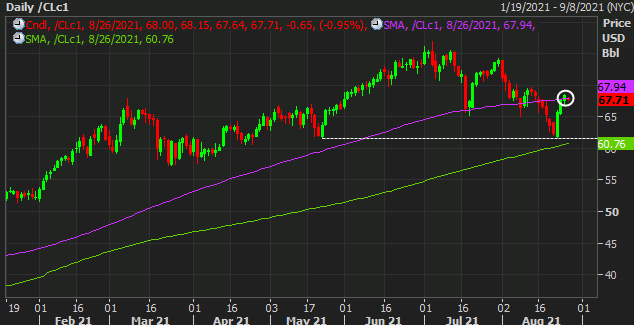 The market moves on the day are pretty much summed up by risk trades taking a bit of a breather after having seen a strong rally in the opening half this week.

Oil is down 1% to $67.70 after observing a strong three-day rally on a bounce from the May lows, with price now slipping back under the 100-day moving average (purple line).

That remains a key line in the sand that buyers will have to hold above in order to keep any further upside momentum going for oil. That said, I would argue that gains are still more contained closer to $70 unless there is a broader risk rally.

As things stand, this appears to be more of a light pullback as the market settles down before we get to Jackson Hole tomorrow. As mentioned yesterday:

Delta variant concerns are still a risk for oil but if anything, they are likely to prove to be mere hiccups as global virus restrictions should continue to be eased as vaccinations pick up in the months ahead.

China also appears to have quickly put a stop to its latest local outbreak, helping to ease worries about a prolonged hit to consumption activity and oil demand.

As such, the broader outlook for oil going into next year remains relatively unchanged as the market is likely to remain tight and that is supportive of higher prices in general.

Overall sentiment on the pandemic and the delta variant is still likely to keep oil gains limited in the short-term but if the market starts to sense a convincing turn in the battle against the virus, there’s room for oil to rally much further from these levels.

For now, the dollar and Jackson Hole are other key factors to consider but in all likelihood, Powell & co. are unlikely to spoil the risk party this week.

Dollar holds slight gains so far on the session

Stocks see a shift out of the Nasdaq. NASDAQ now trading in the red.