EURUSD continues to fall after NFP 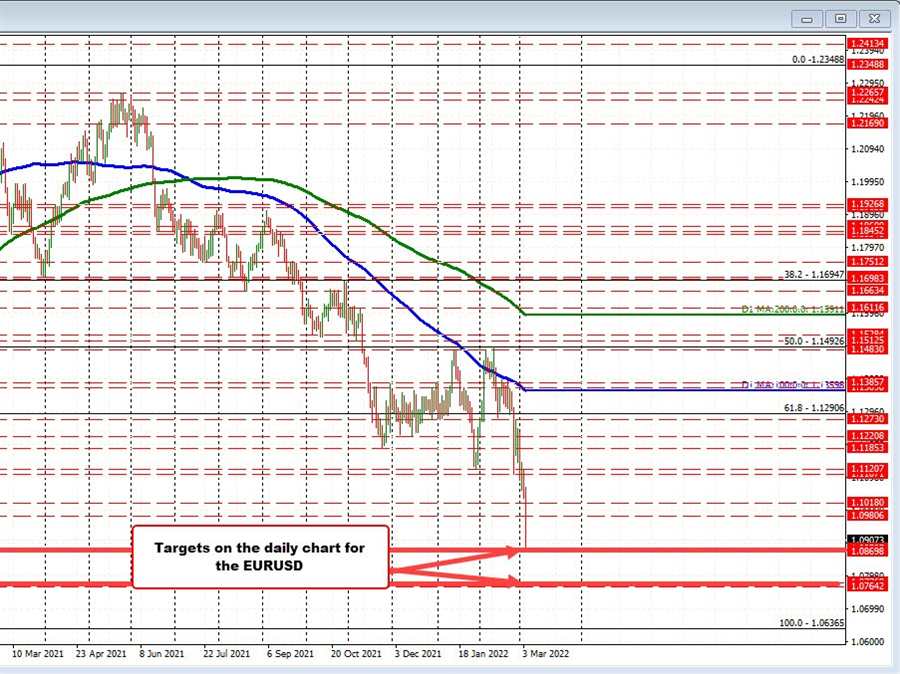 The EURUSD’s fall has not been interrupted after the better than expected nonfarm payroll report. Jobs increased at a faster pace with higher revisions plus the unemployment rate fell to 3.8% from 4.0% last month. The wages were contained however which is good news for a change.

The USD has gotten stronger since the report with EURUSD leading the way. The USD is up 1.41% versus the current currency. That is the largest rise vs that currency since March 2020

Looking at the daily chart below, the pair is approaching a couple of swing low levels going back to October 2019 and May 2020 before the price started it ascent to the upside that took the pair all the way up to 1.23488.

Drilling to the five minute chart below, the pair is in a trend move.

There have been attempts above the 100 bar moving average, but the most recent tests of that moving average saw sellers against the level.

That hold below the MA line, was the go-ahead to push lower, and over the last four or so hours, the price action to the downside has accelerated.

In a trend move, measuring the corrections of the most recent trend leg lower is important.

That area (yellow area in the chart below) will be short-term resistance. If the buyers are to take back some short-term control, they need to take the price back above that area. That is the minimum target for some relief of the trend selling.

Absent that in the sellers remain in full control.

SUMMARY. There is some cause for pause against support targets on the daily chart, but the trend lower remains intact. Watch the 1.0937 to 1.0954 for potential sellers. Stay below and the sellers remain in firm control.

NASDAQ index now down over 325 points

Cable eases towards 1.3300 as pound keeps a little softer to start the new week